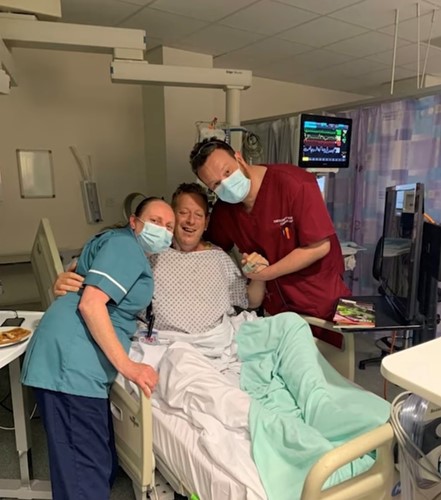 A father-of-two from Stoke-on-Trent is a walking miracle thanks to the quick actions of a delivery driver, West Midlands Ambulance Service and staff at University Hospitals of North Midlands.

Rob Coburn, from Longton, Stoke-on-Trent was walking his dog when he collapsed and went into cardiac arrest.  Asda delivery driver, Anthony Heath, who had only completed his CPR training two weeks before the incident, noticed Rob and immediately started to administer CPR.

The 47-year-old distribution operative for Severn Trent Water was kept alive until an ambulance arrived and staff at Royal Stoke University Hospital continued to save his life.

Rob who is father to 23-year-old Jamie and 18-year-old Jack, said: “I am so unbelievably grateful for Anthony saving my life and giving me CPR. I was given a five to ten per cent chance of survival so to be here today telling my story is amazing. I have been named the miracle man by my doctor!

“Everyone at the hospital who has treated me has provided me with great care and I will be forever thankful.”

Rob was discharged just two weeks after he was admitted to the critical care unit at Royal Stoke. A follow-up appointment is due this month to discuss the next steps in his recovery.

Today Dr Paul Hancock, Emergency Medicine Consultant said: “When Robert arrived in the Emergency Department he was critically unwell. He was essentially dead for a period of time and thanks to the speedy reaction of the delivery driver who gave him CPR he was given the best chance of survival.

“It is incredible really that he walked out of hospital as well as he did and just two weeks after his arrest is really some kind of miracle. It is great to hear how well he is doing.”

Nicola Coburn, Rob’s wife, said: “It’s been so brilliant to witness Rob’s recovery. CPR is so important and we were told the CPR Rob received was first class so it just highlights how important it is to know what to do.

“Thank you Anthony and everyone who helped to save Rob.”

CPR is a skill that can help with the survival of a person who is suffering with a cardiac arrest. It helps to pump blood around the body when the heart can't.