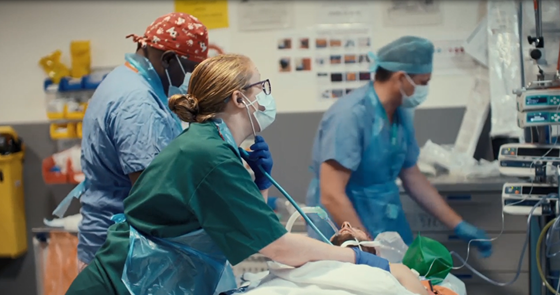 Award-winning documentary 999:Critical Condition, which takes an up-close look at the moments when critical patients in a life threatening condition come through its hospital doors, is to return to television screens on Thursday 6 January.

The third series of Channel 5’s critically-acclaimed series, filmed exclusively at Royal Stoke University Hospital, will once again grip viewers with the work of the UHNM team, saving lives with split second decisions that are often the difference between life and death.

Filmed by Brinkworth Productions, who were given extraordinary access to UHNM’s major trauma centre and other emergency departments for more than six months during the Covid-19 pandemic, the series charts the vital interventions, actions and medical strategies that specialist consultants and teams experience while delivering immediate life-saving care.

The eight part series will reflect the relentless fast pace of the hospital’s daily workload and show the reality of critical care in the vital first minutes after a patient arrives in a life threatening condition as well as urgent and emergency surgical care.

UHNM Director of Communications Lisa Thomson said letting the cameras in again was all about showing a wider audience what it takes to deliver life-saving time critical care in one of the country’s biggest and busiest major trauma centres, all while also dealing with the Covid-19 pandemic .

She said: “999: Critical Condition has received international critical acclaim for its remarkable first-hand glimpse of how our teams make life-saving decisions under extreme pressure. It has been a fantastic opportunity to show people our exceptional staff, their hard work and dedication to providing the best care.

“As with previous the previous two series,  a true picture of the life-threatening injuries and conditions our teams deal with day in, day out is captured but this time all under the backdrop of the pandemic.  The moments of absolute pride, compassion and excellent care that we give to our patients and their families will be there for all to witness.”

Tracy Bullock, UHNM Chief Executive said: “We are delighted that people will get another opportunity to have a real insight into the many specialities provided at Royal Stoke including major trauma, stroke, cardiology and neurology by the whole hospital team."