In this episode we see just how fragile life can be. 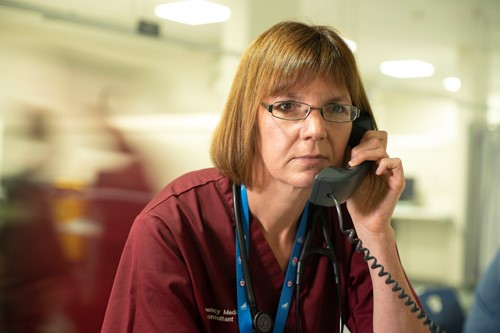 38-year-old Lesley’s heart suddenly stops while driving to work on the M6. Rushed to hospital, Dr Ann-Marie Morris and her team battle to resuscitate Lesley and start to investigate why her heart stopped out of the blue.  Leslie is normally fit and well with no known medical problems.  Her family arrive at the hospital in shock, but the question now is whether her brain has been affected when her heart stopped.

28-year-old Laura is rushed to the Royal Stoke having a severe asthma attack. When she arrives, it is clear to Dr Richard Fawcett that she is deteriorating fast and that her heart could stop at any minute.  He races to gather a specialist team and start intensive treatment.

Meanwhile, Abigail, age 20, has just had a riding accident. Thrown from her horse she landed onto her neck and is in severe pain. Her mother can only watch-on anxiously as the staff try to determine how life-altering her injury may be.

Another emergency arrives. Christine has been hit by a motorbike while crossing the road and has a large open wound on her lower leg.  An elderly lady, can the doctors risk an operation to save her leg? 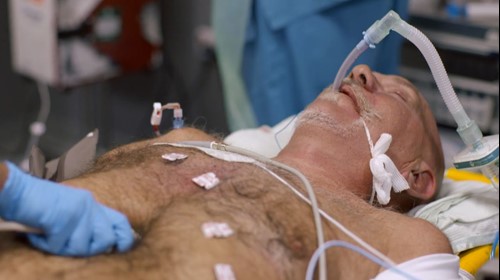 A North Staffordshire granddad owes his life to staff at University Hospitals of North Midlands after his heart stopped following a run.

The fourth episode of hit TV documentary 999 Critical Condition, filmed exclusively Royal Stoke University Hospital, features the story of Huw Chapman who collapsed in a car park after completing the Couch to 5K.

Attempts to resuscitate him were started by Royal Stoke midwife Cassie Cooke who had been enjoying a drink at a nearby pub when the incident happened before he was transferred for urgent treatment at the hospital’s major trauma centre.

In the episode Dr Anthony Taylor, Associate Specialist in Emergency Medicine, says Huw’s “lucky break” was that somebody who knew how to do good CPR was able to do it almost immediately after his cardiac arrest.

He adds: “Without CPR the chances of us being able to do anything for him would be tiny.”

Huw, of Endon, who owns his own flooring company, was then rushed to the cardiology department where he had a stent fitted to repair a tear in his artery which was limiting the blood flow to his heart.

The father of two said: “I was lucky that there were people in the pub who were able to do CPR and saved me and within an hour of arriving at Royal Stoke I had had stents put in and don’t have any lasting damage to my heart.  It is incredible.”

Cassie said: “I did what I had to do when I was there and just got on with it. I was only doing my job. The training I have had is invaluable and it was a fantastic result in the end.”

“I’ve been going to a lot of walks and while I don’t think I will ever run a full 5k again I do enjoy getting out and doing a bit of running and walking and thank the Cardiac Rehabilitation team for helping me do that within a month of the cardiac arrest,” Huw said.

He is now campaigning with the British Heart Foundation for all people especially school-age to learn the life-saving skill of CPR.

This week’s episode of 999 Critical Condition also features a 38-year-old whose heart suddenly stops while driving to work on the M6. Dr Ann-Marie Morris, Clinical Director of Urgent and Emergency Care and her team battle to resuscitate Lesley but the question is whether her brain has been affected when her heart stopped.

A 28-year-old is rushed to the Royal Stoke having a severe asthma attack, a 20-year-old has thrown from her horse, landed onto her neck and is in severe pain and a pensioner is hit by a motorbike while crossing the road leaving large open wound on her lower leg.

Meet the team from Episode 4

Find out more about Anthony

Find out more about Ann-Marie