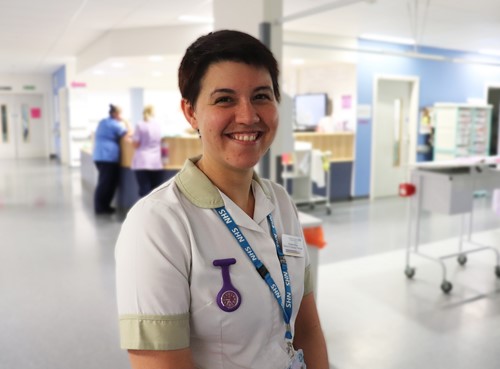 Claire Rae works on the Acute Rehabilitation Trauma Unit (ARTU) as a speech and language therapist and forms part of a team of therapists looking after trauma patients, who have multiple and complex injuries often including brain and spinal injuries, who come either directly from A&E, or through critical care or other trauma wards.

She works with patients to get them eating, drinking and communicating again. Here she talks more about the role of a speech and language therapist and working as part of a multi-disciplinary team including physiotherapists and occupational therapists.

"Communication is so key to everyday life I wanted to do a job where I could make a difference to people who couldn't communicate easily.  It wasn't until I went to university I really realised how much we do with swallowing disorders but it makes sense – it's all the same anatomy you use.  Eating and drinking is just as important to everyday life!

"I particularly love working in neuro -rehab.  Our patients have experienced a sudden dramatic change in their abilities and how their future looks from their brain injury, and I want to be a part of helping them and their families make the best recovery they can, and get back to the things in life they want to be doing.

"I realised early on in my career that I thrive best in the busy team environment of an acute ward – so ARTU is my perfect combination really!

"My favourite thing is without doubt when we find a way for someone to communicate with us again.  When we've introduced a communication aid that enables the patient to tell us they want Planet Rock not Radio 1 on the radio, or that they just want quiet, or gives them the chance to joke with us – that's what makes me tick.

"I worked with a gentleman who came to us unable to move anything voluntarily – not his jaw, not any of the muscles in his face, not his limbs.  His partner was not sure if he recognised her at all as there didn't seem to be any response to her.  We started working with him to get some movement in his mouth and face, so we could start thinking about swallowing his saliva, communicating and getting the breathing tube out, and then a few days later his partner thanked me because he'd tried to kiss her back when she arrived, and she knew he knew who she was now.  That one made me a bit teary eyed!

"I am also frequently inspired by the determination and grit of our patients in such difficult circumstances.  We have goal planning meetings with patients and families to set the goals they are working on in rehab.  I love it when they come to us after a week to say they've already smashed the goal we were aiming to achieve in 4 weeks!  It's great as people improve to start getting to know their character and who they really are, rather than just knowing about their injuries.

"My least favourite part is also the admin and the stats – it's important to be able to evidence what we do for funding but it's not the fun part." 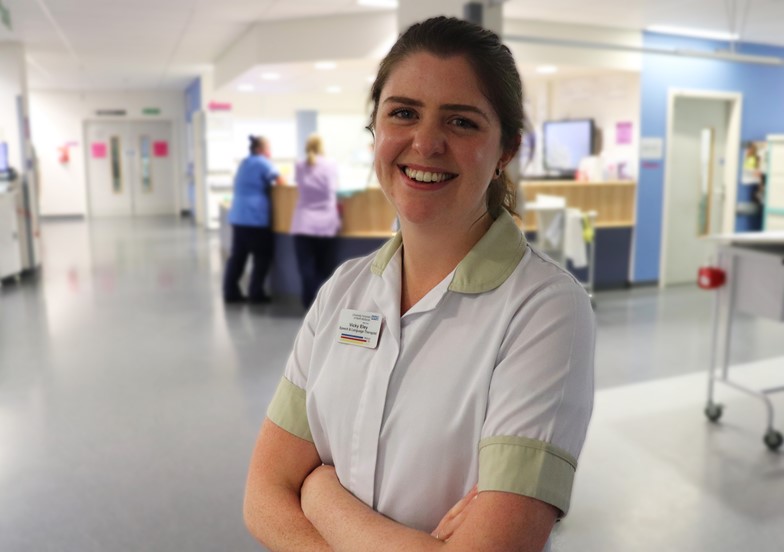 Vicky Eley is a Speech and Language Therapist working in the rehabilitation team on critical care, where her role includes supporting patients to recover from impairments of communication and swallowing following placement of breathing tubes, brain injury and trauma.  She also works as part of the wider multidisciplinary team to help patients to wean from a ventilator and get their breathing tubes removed. Many of her patients then continue their rehabilitation on the Acute Rehabilitation Trauma Unit (ARTU).  Here Vicky explains more about her role and why she does it.

"Critical care can be an overwhelming and frightening environment for people. By being part of

their early rehabilitation and focusing on goals specific to them as a person we give them back control and enable them to get that one step closer to home. This often leads to shorter hospital stays and happier patients and their families, which is really rewarding to see.

involves placing a small flexible camera through the nostril and into the throat to evaluate the swallow and upper airway. This allows me to assess whether people are silently aspirating (food or fluid going into the airway with no cough response). This can be very common after having a breathing tube placed with as many as 40 per cent  of patient's experiencing this.

"The best thing about my job is giving a patient back their voice! When people have a breathing tube they lose their ability to speak as air no longer flows past the vocal cords. Part of my job is to trial them with 'speaking valves' which redirect airflow up to the vocal cords and restore their voice. Seeing the look on a person's face when they realise then can speak again is the favourite thing about my job. The least favourite part of my job is the admin. This is a necessary evil of all therapists' life.

"I worked with one young chap for around four months following his spinal cord injury. One of his biggest goals was to be able to eat a slice of cheesecake. At first, he was unable to eat and drink without this going into his lungs. After months of therapy his swallow function improved, and he succeeded in achieving this goal. We had a cheesecake party on the ward to celebrate!"