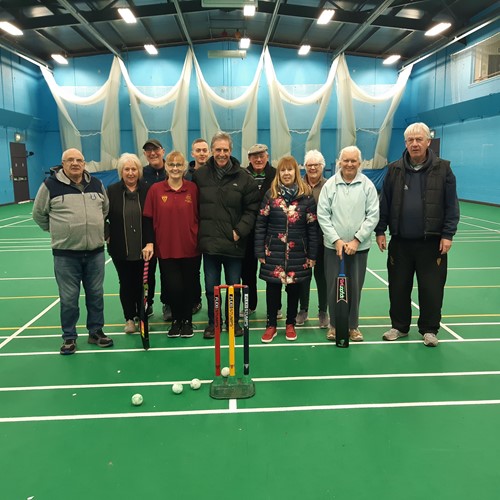 The quick thinking actions of a nurse from University Hospitals of North Midlands saved her teammates life during a cricket match.

Barbara White, Clinical Nurse Specialist for UHNM’s Targeted Lung Health Screening Programme was playing her usual Wednesday evening game of walking cricket at Clayton Sports Centre when she noticed something wasn’t right with one of her teammates.

Ken Wright, 70, was about to bat for his team when Barbara heard him say he was seeing stars and then collapse to the ground. Barbara and Judith Shaw, a retired UHNM nurse, assessed Ken, who was breathing erratically with a faint pulse, which then stopped and they started CPR immediately.

Barbara, who has worked at UHNM for 28 years, said: “It really was a team effort. Along with the Staffordshire cricket coach, Steve Lightfoot, two other players were counting to 30 for us during CPR; one member of the group rang 999, another contacted Ken’s relatives, whilst another went out to flag the ambulance down into the concealed entrance.

Ken was intubated and tests found that he had an abnormal heart rhythm. A single shock from a defibrillator stabilised Ken and the outcome was positive. After a short while Ken was able to breathe without assistance and was stable enough to be transported to Royal Stoke University Hospital, where cardiac stents were inserted the following morning.

Barbara added: “Ken sent a picture of himself from the ward the following evening and looked astonishingly well.  Given the low survival rates of out of hospital cardiac arrests, this was the best possible outcome for Ken and shows the value of basic life support (BLS) training. Although I still update annually, Judith had retained the skills after nine years and was able to leap straight into action. BLS is a skill that can last a lifetime and to be able to save the life of a friend is a privilege beyond belief.

“I’m proud of how all of our team worked together and to see Ken looking so well is the best result we could have hoped for.”

Ken visited the cricket team before Christmas and will be joining the team as the scorer in the next few weeks.

Staffordshire cricket club have now planned to provide defibrillators and training to the walking cricket groups who aren’t based within leisure centres to aid in managing any future emergency cardiac events.