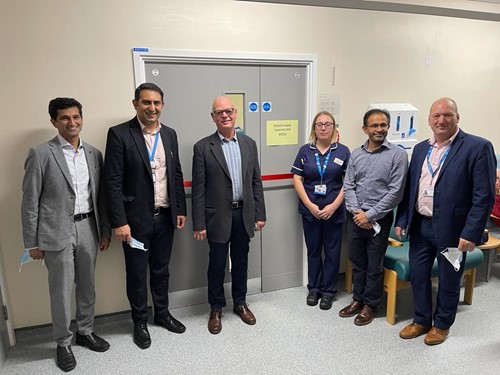 University Hospitals of North Midlands has opened its new Endocrine Unit in recognition of a former doctor’s 25 year contribution to the development of the service at the Trust as well as regionally and nationally.

The Richard Clayton Endocrine Unit was officially opened by Professor Clayton himself on Friday 30 September at the Royal Stoke University Hospital in a ribbon cutting ceremony.

Professor Clayton’s contributed to the development of Endocrine services across the Midlands between 1990 to 2015, when he retired from the NHS. He led the Endocrine department at UHNM, putting Stoke on the national and international map of medicine.

He has extensively published research papers on Pituitary disease and was previously also Head of the Medical division at UHNM and Training Programme Director for Endocrinology for the West Midlands.

Prof Clayton established the North Midlands Endocrine Forum and has now run for more than 20 years to help networking and give doctors the opportunity to discuss difficult endocrine investigation results for complex patients in and around Staffordshire, Shropshire and Cheshire. Several of his trainees are consultants in the specialty in the region with majority of UHNM consultants also having been trained at Stoke.

Dr Biju Jose, UHNM Endocrinology Consultant and Pituitary Lead said: “After many improvements to the service we felt that it was the right time to honour Professor Clayton. He is a pillar of our community here in Stoke and the West Midlands. We felt that it was only right as trainees who have all been trained by Professor Clayton to honour him by naming this unit after him.”

Sam Morris, Directorate Manager for General Medicine and Escalation, said: “Professor Clayton was well established as a Professor in Endocrinology, as well as Head of Division in Medicine when I joined the Diabetes and Endocrine team in 2010.  It was a privilege to work with him supporting and developing the service at that time and it’s great that he’s back today, formally opening our Endocrine Unit, at such an exciting time as we work to further develop the service at UHNM.”

Professor Clayton said: “I am honoured. I really am touched and rather emotional about it. I thoroughly enjoyed my time in Stoke and it was largely thanks to my colleagues that I worked with including the endocrine nurses and secretaries as well. I had 25 years and not one year of that was disappointing to me in any way.

“It is very nice to be back in Stoke, I had a wonderful time here. The people were lovely, the staff and patients as well.” 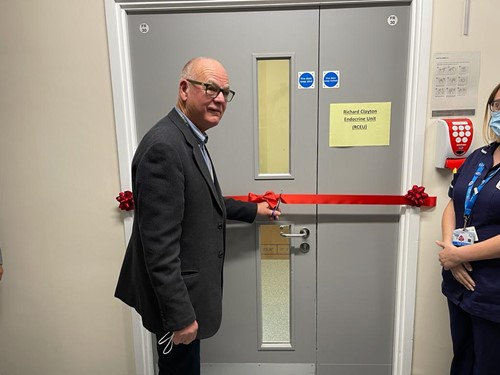