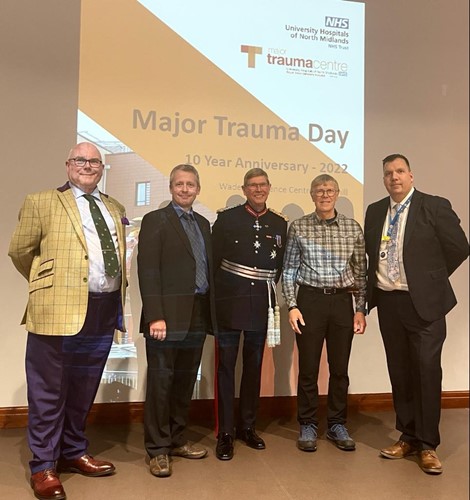 Specialist clinical teams from across University Hospitals of North Midlands have come together to celebrate the 10 year anniversary of its Major Trauma Centre.

More than 1,500 major trauma patients are seen each year at the centre which is based at Royal Stoke University Hospital and was established in 2012. The centre is one of the best in the country, serving a population of nearly three million people and caring for people from a geographical area which stretches from Anglesey to the Peak District.

As a Major Trauma Centre, Royal Stoke, can treat anyone who is seriously injured in incidents such as vehicle collisions, falls, or assaults, and accepts patients direct by either land or air ambulance or those who are transferred from a partner trauma units and since 2012 has seen and treated more than 12,670 patients.

Patients are treated by staff in the Emergency Department, led by a Trauma Team Leader, who works with specialists in orthopaedic and general surgery. They have rapid access to our full range of consultant surgeons and interventional radiologists for management of life threatening injuries and illness.

Martyn Ashworth, UHNM Major Trauma, Specialised Rehabilitation and Neurosurgery Service Manager, said: “It’s absolutely fantastic to be here celebrating ten years of UHNM being a Major Trauma Centre. Over the ten years we’ve seen so many innovations, particularly in the pre-hospital setting that impact on the hospital and patients right the way through to intensive care and patients heading out the other side of the system from a rehabilitation perspective.”

Former UHNM Consultant in Emergency Medicine Dr Peter Oakley, who was integral in setting up the Major Trauma Centre at Royal Stoke, said: “It was quite a journey to establish formally the North West Midlands and North Wales Major Trauma network ten years ago and it’s great to see the fantastic developments since. There have been advances in pre hospital care, immediate hospital care, surgical and other technical care as well as and perhaps especially rehabilitation.”

He added: “The challenges of Covid-19 have been huge but the Major Trauma Network has continued to make progress. As always when things are going ok there is always more to be done. The number of elderly trauma patients has continued to increase. Now would be a great time to consider developing and elderly acute rehabilitation unit, to match the successful Acute Rehabilitation and Trauma Unit for younger adults. It would be better for the older patients themselves and likely speed up their passage through the hospital and ease the burden of continuing social care.”

HM Lord Lieutenant for Staffordshire Ian Dudson, who supports the hospital and attended the celebration said: “I have been watching from a far as the centre’s reputation has developed and it is very heartening to know you have one of the most successful survival rates in the country. It is not surprising to me you have continued to learn and develop over the last ten years and evolve your treatment, efforts and processes to impact positively on patient care to give them the best chance. I want to thank you on behalf of the people of Staffordshire and also the wider area. I particularly want to thank you for whom your intervention has made such a positive benefit on the rest of their lives. Congratulations on your first ten years and I wish you every success in developing the centre in the years to come.”