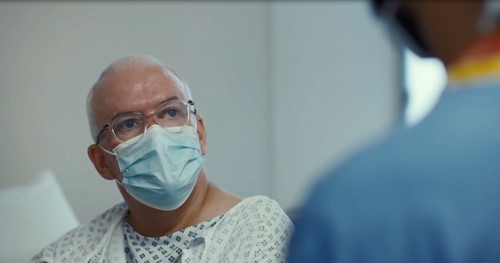 A Staffordshire grandfather who had life-saving emergency surgery to remove a huge tumour from his stomach is set to feature in the next episode of 999: Critical Condition – filmed exclusively at Royal Stoke University Hospital.

Nigel Brammer, who lives near Stafford, has thanked surgeons at University Hospitals of North Midlands NHS Trust (UHNM) after they removed a 5x8cm tumour from his stomach, diagnosed after he was rushed to A&E because of abdominal pain and noticing a strange ‘slipping’ sensation when bending down to tie his shoelaces.

Clinicians were initially concerned that the tumour may have grown too closely around Nigel’s organs to be operable – but they successfully managed to remove the entire growth.

Prior to undergoing surgery Nigel had already contracted Covid and then suffered a heart attack, forcing him to finish work just eight months short of retirement.

Today Nigel said: “When I first saw the size of the tumour on the scan, I couldn’t believe it, it was absolutely huge. I didn't think it was survivable.

“I was in surgery for about four or five hours. Doctors said the tumour wasn’t treatable with medication so the only option was to remove it.

“Under the difficult circumstances of the pandemic, the staff at Royal Stoke are still life-savers. No words can fully express my deepest gratitude and appreciation for what they did.

“Now the prognosis is good and of course, I just hope it doesn’t come back.”

His surgeon who is seen in the documentary removing the tumour said:  “It was a large gastrointestinal stromal tumour. These are rare tumours and it was identified completely by serendipity when he came to the emergency department with upper abdominal pain.”

Nigel’s case will feature on 999: Critical Condition on Channel 5 on Wednesday 22 June at 9pm when staff from the UHNM Major Trauma Centre will again provide life-saving care to patients following a fall down the stairs, following a car crash and an accident involving a stair lift.