Two senior nurses from University Hospitals of North Midlands have been described as “guardian angels” after saving their neighbour’s life.

Andy and Jenny Weedall, who both work at Royal Stoke University Hospital, provided lifesaving care to their neighbour Jo Melarangi, when Jo's husband, John, asked if they could check on her when she arrived home from the gym feeling unwell.

Shortly after they arrived Jo went into cardiac arrest and CPR was started immediately. She was successfully resuscitated after 15 minutes and when the paramedics arrived Jo had a pulse and was breathing by herself again.

Jo was taken straight to the Critical Care Unit where it was discovered she had suffered a heart attack which had led to her cardiac arrest. Two coronary stents were fitted and Jo is now making a good recovery.

The 51-year-old, from Alsager, said: “Thank you so much to Andy and Jenny for saving my life. They are my guardian angels. Without them I wouldn’t be here, it’s as simple as that.”

Tracy Bullock, UHNM Chief Executive, said: “It was an incredibly emotional to hand out the Chief Executive Award to Andy and Jenny. It makes me feel very proud of the skill and the talent of the staff that we have got in our organisation. To see the outcome of that and to meet Jo and her family was fantastic. Credit to Andy and Jenny for successfully resuscitating Jo and it is great to see she is on the road to recovery.”

Andy said: “Receiving this award makes us proud to be a nurse, we feel very honoured to receive an award for doing something that is now second nature to us. We have been trained to such a high standard and Jo being here today is proof of the skills we as nurses possess.” 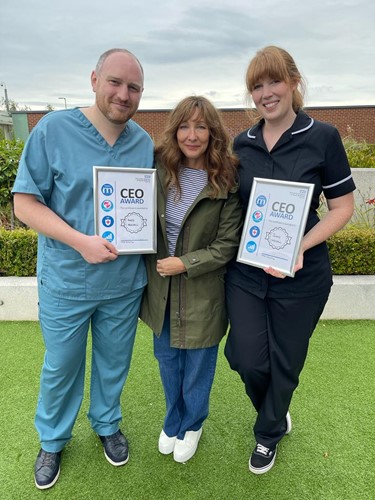