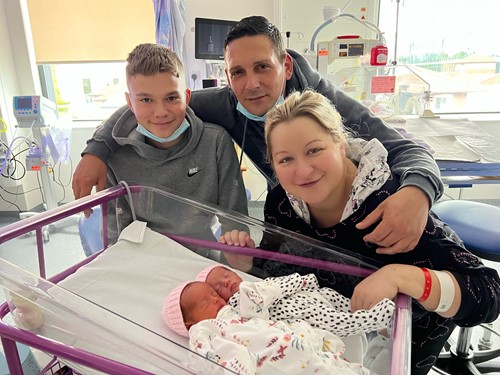 Tiny twins from Stoke-on-Trent born five weeks early at University Hospitals of North Midlands have been able to go home earlier than premature or sick babies would traditionally be able to thanks to the launch of a new community outreach service.

Twins Holly and Ellie Hobson were born on 8 June by caesarean section. Holly was born first at 11.33am weighing 4lb 9oz, shortly followed by Ellie at 11.35am weighing 3lb 6oz.

Today their mum Anna Wisniewska from Stoke-on-Trent, who already has a stepson, 12-year-old Jake, thanked the new team for allowing her to go home with her babies earlier than expected.

Despite being born prematurely, on Wednesday 6 July the twins were able to go home after just four weeks in hospital thanks to the support from NCOT which has visited the family at home once a week to check on Ellie’s weight, monitor her stomach after a bowel infection and to provide essential health checks to both babies.

By working with the clinical team and the families on the neonatal unit, the outreach team are able to help develop the skills the family need to continue a baby’s ongoing development in their own environment and reducing their length of stay in hospital. 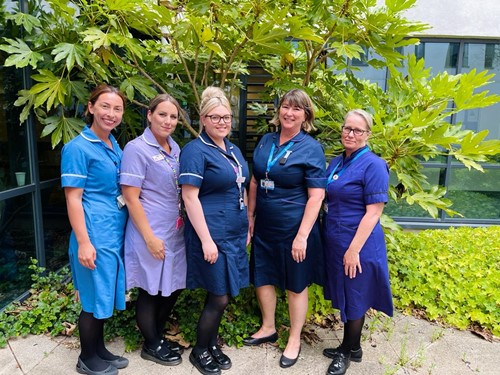 Anna said: “The neonatal outreach service means so much to me. It allowed me to go home with Holly and Ellie and enjoy our time as a new family. It has taken the pressure off knowing the team will come and check on them both and also the extra checks for Ellie have been so reassuring.

“I would like to say a big thank you to the neonatal team for the incredible care we have received.”

Babies will be under the care of NCOT for up to six to eight weeks but will only be discharged when the team is confident there are no ongoing concerns. Should they feel further specialist support is required, NCOT will make a referral to the appropriate community children’s nursing team.

Senior Sister Sarah Roberts for NCOT said: “We hope this service will improve families’ experience on their neonatal journey.

“It enables the whole extended family to enjoy and welcome the baby into their lives.”