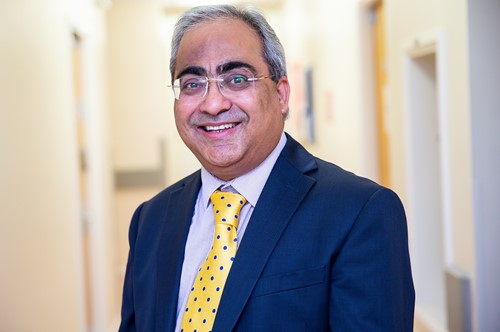 University Hospitals of North Midlands is proud to reveal that Dr Amit Arora, Consultant Geriatrician, has been shortlisted for Clinical Leader of the Year at this year’s HSJ Awards, recognising outstanding contribution to healthcare and earning the opportunity to showcase their achievements on a national platform.

Dr Arora has been nominated for his passion for improving care of older people which has resulted in many nation-wide improvements creating positive change, bringing people and organisations together. His biggest achievement is probably identifying and describing ‘Deconditioning Syndrome’; subsequently developing an inter-nationally adopted and acclaimed ‘National Deconditioning Awareness and Prevention Campaign’- “Sit Up Get Dressed Keep Moving”, to prevent older patients from deconditioning in hospitals and care homes. This has become a global social movement.

Today, Dr Arora said: “I am absolutely delighted to be a finalist for the prestigious HSJ’s Clinical Leader of the Year award. It means so much to me and to the teams who support the work.

“To be recognised by peers amidst such fantastic finalists is an amazing honour and I am very humbled and grateful.”

A staggering 1067 entries have been received for the HSJ Awards 2022, with 219 projects and individuals making it to the final shortlist (from across 162 organisations). The high volume - and exceptional quality – of applications is once again reflecting the breadth of innovation and care within the UK’s healthcare networks.

Following the thorough judging process, Dr Arora was shortlisted, ahead of the official awards ceremony to be held later this year in London (November 17th). Despite the tough competition, Dr Arora stood out as a ‘success story’ worthy of a prized place on the panel’s shortlist.

At this first stage of judging, the shortlist was based on ambition; outcome; value; involvement & working together and crucially, how the project might be “picked up” and replicated elsewhere for the benefit of both patients and professional colleagues.