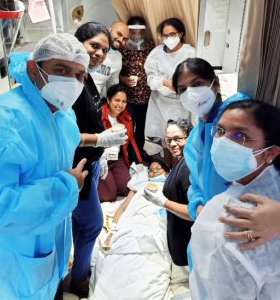 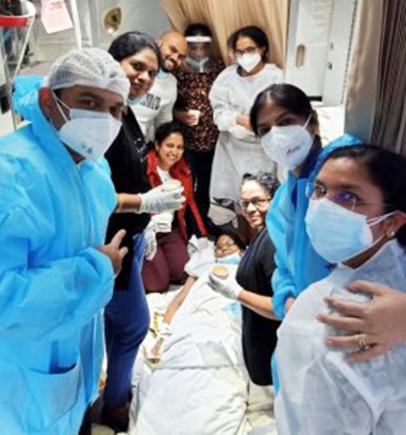 A University Hospital of North Midlands consultant who answered the call for a doctor on board has helped deliver a premature baby mid-air on a flight to India.

Dr Manju Paul, consultant dermatologist, was on an Air India flight from London to Cochan to see her family when a passenger went into labour prematurely.

She said: “About two hours into the flight after we had had food there was an emergency call. I’ve not experienced this before  but have always been prepared to deal with chest pain or similar but never thought I would end up helping to deliver a baby.”

Luckily for the mother, who was 29 weeks pregnant, there were a number of other experts on board during the October flight, including a neonatal nurse, who all sprang into action!

“Within 10 minutes of the call for medical staff we took her to the front of the plane because it was clear she was in labour. There was another doctor and four nurses and we were all trying to work in a very small, confined space in the airplane, which was pretty challenging. But the teamwork was great,” she said.

She added: “The worry was that the baby was so tiny and we had another seven hours left on the flight, so the decision was made to re-route to Frankfurt and allow mum and baby to receive medical care. Thankfully, the plane was fairly well equipped with medical equipment and the crew were also experienced handling surprise events.”

Dr Paul, who has worked at UHNM as a consultant since 2016, after completing her core training at County Hospital in Stafford, said: “People on the plane were anxious, it was stressful and some were praying. However, it was hugely satisfying and I was thrilled to be able to help as part of the team effort.”