This powerful, award-winning documentary series follows doctors and their teams as they work to save the lives of the most critically ill emergency patients.  Filmed at Royal Stoke University Hospital, each programme witnesses urgent life-saving care as the staff treat patients with a wide variety of critical conditions including heart attacks, strokes, stabbings and fast-moving cancers.  With extraordinary access to NHS staff and the patients and families involved, the series follows their efforts to provide time critical, emergency care for those whose lives hang in the balance.

In this episode, 17 year old Dougie is rushed in by helicopter after a mountain bike accident leaves him with a catastrophic head injury. A scan shows his brain is bleeding and as young people’s brains are more susceptible to the effects of rising pressure, Neurological Registrar Bobby Sachdev knows that he needs to act quickly to prevent long term injury, or even death.

Age is also a significant factor for Joe and his wife Sheila, who need urgent care after both being injured in a major road traffic accident. It’s clear that the couple are in great pain when they arrive, but it’s not until Trauma Team Leader Ann-Marie Morris begins to investigate further that she discovers they both have multiple fractures.  In a couple who are advancing in years, these injuries could lead to complications which could be life changing for them both and Ann- Marie battles to give them the urgent care they so desperately need.

Elsewhere, Vance has been rushed into hospital for an emergency operation. A recently diagnosed cancer is blocking his stomach, essentially starving him to death. It’s now or never for Surgeon Oliver Priest, who knows that he must remove both the tumour and Vance’s stomach to give him any chance of survival. But midway through the surgery he makes a discovery that changes everything for his patient.

Finally 49 year old Elton is brought in with a crushing pain in his chest. Having just lost his father to a heart attack, he is rushed to the Cath Lab for an operation to clear the blockage. But will the team be able to perform the life-saving procedure before his heart stops and history repeats itself?

A North Staffordshire father-of-two who had life-saving heart surgery will feature in Wednesday’s (3 August) episode of the Channel 5 programme, 999 Critical Condition, filmed at University Hospitals of North Midlands.

Elton Wood, from Cross Heath, Newcastle-Under-Lyme, recognised what was happening to him after witnessing his own father’s heart attack when he was just nine-years-old.

He was rushed to the Critical Care Unit at Royal Stoke University Hospital to receive emergency care.

Today the 50-year-old, from Newcastle-under-Lyme, said: “I got up for work, like any other day really but started to feel really breathless, and then I was sick. My wife told me to take a paracetamol and go to bed but I couldn’t sit still and just generally felt uncomfortable which made me realise I was having a heart attack.

“I was with my Dad when he suffered his heart attack when he was 42-years-old. I knew the signs and my symptoms were exactly the same. It was confirmed by the paramedics once they arrived and ran their tests that it was what I thought.”

At Royal Stoke Elton, who is father to 20-year-old James and 21-year old Jacob, was advised by Consultant Cardiologist, Dr Mark Gunning that he would need a stent fitted urgently to clear the blockage and to minimise the reoccurrence of another life-threatening heart attack or cardiac arrest.

The self-employed builder said: “Dr Gunning was excellent; he was so reassuring before my operation, he put me at ease and he was just brilliant. The care I received from everyone when I was on the ward after my operation was amazing too!”

He added: “I feel great now; I am waiting for a follow up appointment with Dr Gunning and I will be having an exercise test soon.” 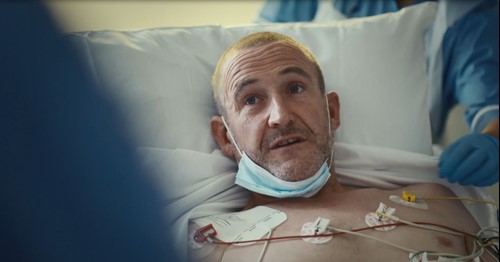