Filmed at Royal Stoke University Hospital, each programme witnesses urgent life-saving care as the staff treat patients with a wide variety of critical conditions including heart attacks, strokes, stabbings and fast-moving cancers.  With extraordinary access to NHS staff and the patients and families involved, the series follows their efforts to provide time critical, emergency care for those whose lives hang in the balance.

When Duncan is admitted to Royal Stoke emergency department after falling down a full flight of stairs onto concrete, trauma team leader Richard Fawcett fears the worst. As well as facial injuries, Duncan’s pupil is blown, and Richard knows this could be a sign of a catastrophic bleed on the brain.

With life-threatening symptoms, Duncan is rushed into scan, where Richard’s fears are quickly realised.  Finding blood behind his eyeball, Richard is sure he’s found an aneurysm, which left untreated, could be fatal.

Ex-hairdresser Deanna has been rushed in for emergency surgery. She has a life-threatening brain tumour, and left untreated, faces permanent paralysis. Now Mr Brydon and his surgical team have to carefully remove the large tumour, without damaging the healthy brain behind it.  But one false move, could have catastrophic consequences.

Across the hospital, 21 year old Joe arrives by air after falling from a third story window and landing on metal railings.   He’s fractured multiple ribs, but trauma Team leader Anne-Marie fears Joe may have a collapsed lung, meaning he could have a heart attack, at any minute.

Finding blood around his lung, the race is on to clear Joe’s chest and give him a fighting chance of recovery.

Finally, 78 year old Barry has blacked out at the wheel of his car and bulls-eyed the windscreen of his car.  Trauma team leader Victoria Burnham has to think on her feet.  Why has her elderly patient lost consciousness? And how will his frail body cope with such a high impact collision?  She quickly discovers the worst - Barrie has broken his neck.  But when doctors find an underlying faulty heart valve, Victoria has to act fast to prevent Barrie’s condition from deteriorating rapidly. 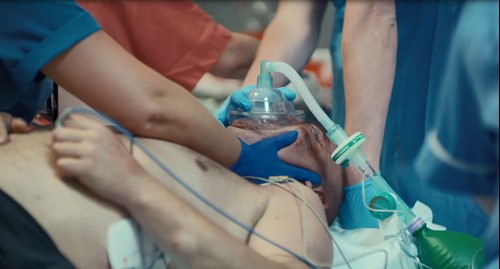 A father-of-two who survived a fall down a concrete stairwell following a potentially fatal bleed on the brain at his home is to appear in 999:Critical Condition – the powerful and award-winning documentary series which follows teams from University Hospitals of North Midlands as they work to save the lives of the most critically ill emergency patients

Today Duncan Cliffe, of Cheshire, who is now recovering at home spoke of his appreciation for the care he received at the Major Trauma Centre at Royal Stoke University Hospital.

The 47-year-old a construction worker had just arrived home after working on a project at Leighton Hospital when the bleed occurred in July last year, causing him to lose consciousness and fall all the way down the stairwell at his block of flats in Crewe.

He was taken to the trauma centre in Stoke by ambulance and was intubated almost immediately upon entering resus due to blocked airways.

In the episode, which is on Channel 5 on Wednesday 29 June at 9pm, doctors are concerned about blood behind his eyeball and Dr Richard Fawcett, Trauma Team Leader said it could have been a potentially “catastrophic event” . 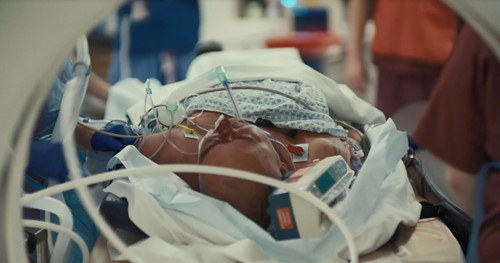 Duncan who is father to 14-year-old Freddie and 20-year-old Jessica. said: “It was just a normal day when it happened and I had just arrived back from work at around teatime.  I don’t really have any recollection of what happened, the first thing I knew I woke up in A&E.

“I’m pretty much getting back to normal now and am hoping to return to work shortly and a bit of normality.”

Meet the team from Episode 3