In this episode, Damion has sustained numerous traumatic injuries after being trapped upside down in his car after a crash. Despite numerous injuries to the head and chest, Trauma Team Leader Dr Chris Pickering is most worried about Damion’s lungs as his patient struggles to breathe.

The stakes are high too for David. A fun-loving grandfather who loves to ride his motorbikes, David has just been diagnosed with a brain tumour that is pressing on his brain stem. He needs an emergency operation or the tumour will kill him. But the sixteen hour operation with neurosurgeon Mr Price is high risk.

Meanwhile as Dr Diane Adamson rushes to treat Janet, a female motorbike passenger involved in another serious crash, a second trauma call goes out - this time for her partner Martin. Both patients have significant injuries.  At first, Janet seems to be the less urgent of the two, but then Dr Adamson discovers that there is no time to lose. Janet’s life is on the line.

Meet the team from Episode 2

Series 2 introduced us to a whole host of incredible patient stories. Here is just one of them​...

Motorbiking couple Martin Hathaway and Janet Walker are to feature in the second episode of the latest series of 999: Critical Condition, the exclusive documentary charting the life and death decisions and actions of staff at Royals Stoke University Hospital.

The local grandparents, of Rugeley, were rushed to Royal Stoke’s accident and emergency unit last autumn when their motorbike collided with a car. The couple were brought into resus within minutes of each after both sustaining serious injuries. Martin, 62, suffered multiple broken bones and Janet, 53, suffered a break, multiple fractures and several broken ribs.

Thanks to the skill and expertise of clinicians at the Trust’s trauma unit, both are now recovering at home.

The accident happened on 8 September as the pair were travelling back from babysitting two of their grandchildren.

Martin said: “We had been on the road for about 15 minutes when a car pulled out from a t-junction. We ploughed straight into it at 50 mph, I didn’t have time to break. I was unconscious for about 10 minutes and when I came to there were several cars and people around. The pain was excrutiating, like I’ve never felt before. I tried to stand up and fell over, then I noticed that a bone was sticking out of my leg and there was lots of blood. I could only move the top half of my leg.

“I broke my left little finger and the thumb on my right hand. My arm was in a cast up to my elbow for seven weeks, I broke my right femur and had a lot of grazing and gravel rash.

“The scariest part was having blood clots on my lungs, I was coughing up blood and on oxygen for quite a few days.

“When I left hospital after 16 days all the staff lined up in the hallways and rang bells, cheering. It was a lovely send-off, I was really chuffed. 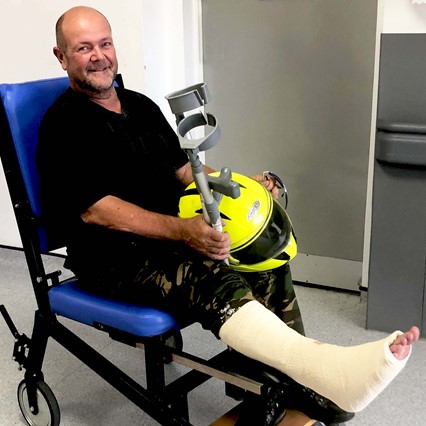 “I’m hobbling along now and it’s slow progress, but hopefully we’ll both get there.”

Janet spent five weeks in hospital after the accident. In the programme Emergency Medicine Consultant Dr Diane Adamson says: “There are some significant injuries for Jan with lots of injuries down in the lower limbs which we expected but she does have significant injuries in her chest as well. She has come a cropper, that’s for sure.”

Janet said: “I can only remember little snippets, like flashing lights sand the ambulance lady asking if it was ok to cut my clothes.

“I feel well in myself now and am going through physio. I have plates and pins in my ankle and knee as well as fractured ribs, it’s all on my left side. Doctors used donor skin from my right thigh to patch up the area around my ankle, it’s amazing what they can do. We’re staying at my mum’s at the moment, she’s been brilliant.” 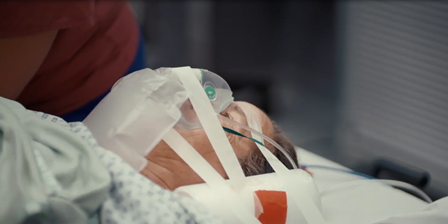 Martin and Janet have been together for 13 years and have ten grandchildren between them. They enjoy traveling in their motorhome and hope to return to Europe when they are feeling well enough.