In this episode a young woman is admitted with life-threatening head injuries sustained in a car accident. Clinical Director Dr Richard Hall must make split second critical decisions. Can the team save her life?

Then there is another urgent case. Shane – a fire fighter and father of four – has been diagnosed with oesophageal cancer despite being an exceptionally fit and healthy 40-year-old. There is a narrow window of opportunity to operate on this fast-moving cancer before it is too late.  In an eight-hour operation Oesophago-Gastric Surgeon Mr Oliver Priest must try to remove this fast-moving cancer to give him the best chance of survival.

In the trauma unit, team Leader Alex Hart and the surgical team provide urgent care for a motorcyclist with devastating injuries to his foot following a crash. After stabilising him, the motorcyclist is rushed to surgery in a desperate attempt to save his leg. A life saving choice emerges, and it involves a heartbreaking decision in the midst of emergency surgery.

Series 3 introduced us to a whole host of incredible patient stories. Here are just a few of them​...

A 30-year-old wakeboarding enthusiast is to feature in the first episode of the latest series of 999: Critical Condition, the exclusive documentary charting the life and death decisions and actions of staff at Royals Stoke University Hospital.

Toby Yeo, lives near Chorlton in Greater Manchester, collided with a stationary boat shortly after performing the popular ‘air rayley’ trick and suffered a badly broken leg. Whilst the incident left him on crutches for three months, doctors initially feared it could have been much worse.

Today Toby said: “At first doctors thought I might have damaged my spine and pelvis, but fortunately it turned out they were ok. On the day of the accident I went to meet up with a friend who has recently got into it and I had already done a few laps and a few tricks. I edged out for a trick called ‘air rayley’ which is also known as a ‘Superman trick’ where you sort of fly through the air. I landed perfectly but it’s kind of hard to explain what happened next. I’ve done these tricks time and time again, I could do them with my eyes closed, but this time the cable came all the way back into the shore and I ploughed into the side of a nearby boat.

“I knew it was bad and my leg was bent in an awful kind of way. It was crazy, excruciating pain, like the worst pain you’ve ever experienced then multiply that by 50. The operators were really good and calmed me down, they put me on a stretcher and lifted me to shore where we waited for an air ambulance. I remember even in my state of pain I was still really gutted when paramedics chopped through my wetsuit! They wrapped me up, gave me painkillers and took me to hospital.”

Toby has practiced wakeboarding for years after getting into it at a young age and has even competed semi-professionally. 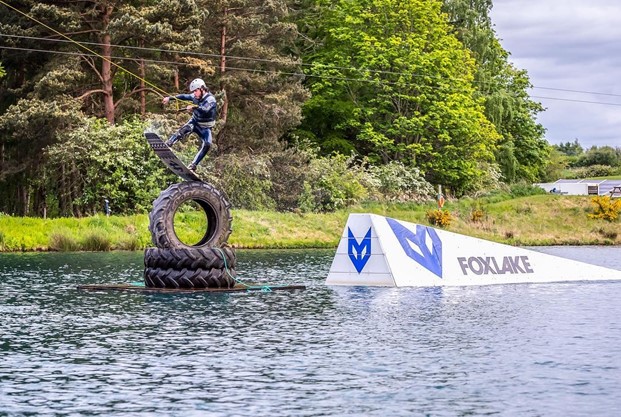 He was brought into resus at Royal Stoke University Hospital, Stoke on Trent - home to one of the top major trauma centres in the country. His story will be told in the latest series of 999: Critical Condition on Channel 5.

After initial concern, scans performed in the hospital’s radiology department revealed Toby had a narrow escape, with just a clean break in his left thigh bone.

In the episode his doctor, Trauma Team Leader and Emergency Medincine Consultant Dr Anthony Taylor says: “We hope for the best but prepare for the worst all the time because it is not safe to do that.”

Wakeboarding is a high intensity sport which involves the rider standing on a wakeboard (a short board with foot bindings) and being towed behind a motorboat across its wake and especially up off the crest in order to perform aerial manoeuvres.

Toby said: “My granddad and uncle grew up water skiing at Lake Windermere, so we’ve all always been involved in water sports in some way and my uncle even represented Great Britain for water skiing in Sicily in the 90s. They passed their love of water sports down to me and my brother and we joined a club where we could train and practise each weekend.

“The whole thing has been a horrible experience, but the care was great, the staff looked after me and my surgery went well. Everyone was nice and I got to talk to a few other patients, one who had suffered a lot more injuries than me following a motorbike accident.

“I went back to work a few weeks after the accident, I didn’t let it slow me down too much and have still worked at numerous different music festivals and events on my crutches taking photos.

“I’m feeling pretty good now and I got off my crutches in September. My leg isn’t fully healed though, I need to build the muscle up around it and keep doing my physio.

“I’m hoping to start wakeboarding again in March or April this year, so I guess we’ll see what happens when I start.”

Toby is a freelance photographer and filmmaker and has even created his own specialist clothing brand ‘Bay6ix’, which focuses on outdoor and sports clothing.

Toby said: “I will just keep working on my business now and I have recently bought a house with my girlfriend Jodie, who I’ve been with for six years. It’s all about moving forward, I just want to keep growing everything in my life.”