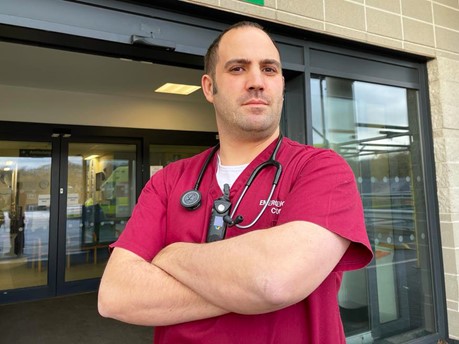 As a teenager I was an avid fan of ER and I think I always wanted to do Emergency Medicine from watching that. There was something about the excitement and the ‘fix anything’ mentality. Once I became a doctor, I was well suited to the nature of the work. Nowhere else would tolerate such a short attention span!

I have worked in Emergency Departments across the world and have a number of memories and experiences. Most notably I met my wife at work in ED, proving not all night shifts are bad.

However, one of my most terrifying experiences was when I worked in Australia. I was quite a junior registrar on my first set of nights and had three extremely sick patients. I was rotating round the patients waiting for signs to intervene on. One required intubation and was referred to intensive care and luckily the others settled down. Thankfully all three survived but it was extremely hairy at one point.

Another Australia memory was when I had to transfer a severely unwell asthmatic patient who was being ventilated. The ventilator could not adequately do the job so I had to hand ventilate (squeeze the bag every 5 seconds) for over an hour ambulance transfer. Both hands could hardly move by the end.

Clinically, I am far more interested in the "fix it now" type cases so injuries and procedural stuff and feel much more at home in the resus department and minors injuries.

Away from the clinical work, I am largely involved in education and am the training programme director for half our West Midlands region.

I've genuinely saved lives and seen incredible tragedy but I've also never laughed more at work over the silliest things. It’s quite dark, but being able to find fun and silliness in all the chaos and pain is probably one of the things I like most in my role.

The least favourite part of the job is sometimes seeing the impact of structural or financial issues on patients.